Welcome on Saxloops, the saxophone and iOS based music blog!

Here is my full review of the Saxmute One for sax tenor.

Playing sax can be problematic related to neighbourgs tolerance. It’s a loud instrument, and us players have to practice a lot, many hours per day everyday to have good skills. Some appartments don’t even allow to play pianissimo, everybody will hear you because of resonance. In the past, I had an isolated booth but had to sell it because of space. To be honest, it was efficient for isolation, but wasn’t that good for acoustics with harsh and short reverb and lot of disturbing stationnary waves. Even practicing scales and arpeggios was sometimes odd and uncomfortable because of those resonating notes, and recordings were hard to mix well because of those colorations. The price was 4000 euros, and a good acoustically corrected isolated booth is around 8000 euros, which is a big budget BTW.

So since a while, I play outside which is perfect for tone practice, as you can play as loud as you want. Biggest issue is if it rains there is no music, if it’s cold no music too. So here in France, playing outside will be 4 months per year… not acceptable solution.

I tried the Lebayle sponge mute you put in mouthpiece, neck and bell. Works OK for pianissimo playing but not that efficient, still a lot of resonance, and too big alteration of playing techniques when returning to normal playing.

Then I’ve found on the net almost two years ago this thing : Saxmute One, from Russia.

A new plastic mute with improved concept, you can also find them on Facebook.

The whole thing is in two part which are assembled with ingenious magnets system, with a sax holder inside. It’s pretty easy to put the sax inside. The mute itself is mounted on a speaker stand, which is stable and leaves your neck and shoulders free from any weight. The mute has lot of space inside, so your hands have room and it’s easy to play all notes even palm and side keys. Space allow for more easy playing of bell low notes too. The mute looks nice with a cool shape, it’s classy. There are mount and hole for mic/wire, and a hole to hold a lyre for reading music. Intelligent conception.

I play with this mute since 1.5 year now. The isolation is impressive. If you play at normal volume, no neibourghs will hear you. Even my wife and daughter in the appartment barely hear me when I play in the kitchen and they’re in other rooms. If you play pianissimo, I can play even until 11 pm or midnight. If you play very loud FFF during the day, it’s more noisy but totally acceptable, no neibourghs nor family have complained yet. So it’s a total winner here. It cuts low and high frenquencies a lot, and sound core pretty much too, so much resonances are removed from the room where you play. You can practice only with the mute your scales, arpeggios, studies, and have fun. You can play as much times per day you want, so it’s better than car/outside solution in this sense. 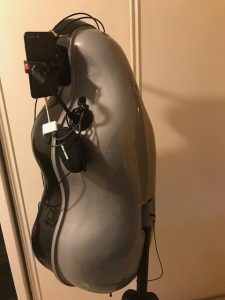 I’ve mounted for the first year a clip-on mic inside the mute. The idea was to correct low and high frequencies and add a physiological compensation by monitoring system. I’ve mounted a SD systems SX-1 without the original metal mic holder, directly between two pyramidal foams inside the mute. It stayed here and allow for angle adjustments. The SD systems adjustable preamp was holded with a velcro strap on the sax/mic holder. The wire was going through foam and wire hole, with no to little modification. Then I’ve mounted a car smartphone holder on the side of the mute for my iPhone 5. I used a mic/headphones adapter, CTIA norm, 2 euros on amazon. This allowed me for direct monitoring on free Garageband app on my Iphone. For novices, I was able to hear the sax in headphones while playing. Using simple Earpods gave me good results, because you want to hear your natural sound from the mute as much as possible, but I now mainly use a semi-open Studiolux 681 EVO which is cheap and sounds very natural. I also use Shure SE215M+SPE IEM, which is great for using with some pitching audio effects. The goal is truly to have your true sound and mic sound mixed together in a natural way.

I have since then changed some elements in that setup. I’ve replaced the CTIA adapter by an IKMultimedia iRig PRO I/O, an iOS audio interface which allows for much better audio quality, and has 48V Phantom for condenser mics powering. 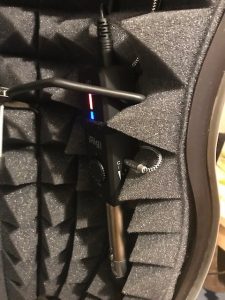 I’ve added a T-Bone SC400 large capsule condenser mic which gives a pretty nice and detailed sound, with not too much low notes resonance thanks to its high pass filter and supercardioid pattern. Mic placement is also essential and has to be close to the sax bell. It’s also pretty small and fits well in the mute. 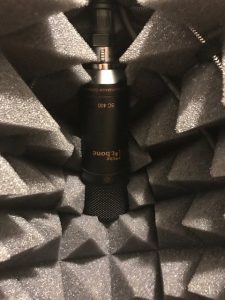 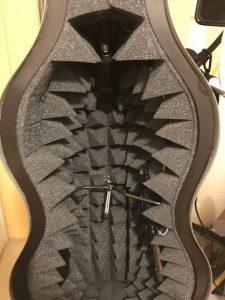 I’ve also upgraded my phone to an iPhone 7 plus which as becomed my ultra mobile studio. Whole system is powered by by Apple Lightning to USB3 adapter which gives juice to iPhone, iRig and mic, with an Anker 10000 mah Powerbrick. 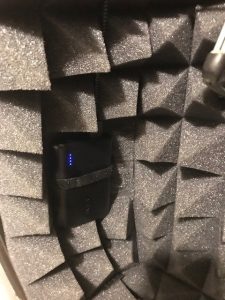 The sound I get from this system is very good and fun to play, very close to my real sax sound unmuted. You will have a great control on your tone, as you will hear it better with low and high frequencies close to reality. And it allows you to play quieter, because you don’t have to overcompensate the mute effect by playing louder. You will play really quiet. I became an iOS apps addict, you can do very nice things with that music recording/production environment, which is also the purpose of that blog with tutorials and reviews. Most of my music you can listen here is made with that setup, for exemple Madreeon:

Other good things mic/headphones/Iphone allow is playing on some playalong, like Aebersold series. It’s quite fun and useful to practice improvisation. And you can record yourself with surprisingly good results. I suppose it’s explained by foam and space/shape of the mute, but the tone recorded is pretty natural and warm. It’s a huge and unexpected bonus, and allows for real homestudio recordings with your own music.

There is no huge issues for mute/unmute switching. Air column is still strong, the biggest thing is to adapt for neck strap and sax position, but it’s ok and don’t take too much time.

Some limits of this mute are bell notes. They are totally playable, but depending on your mouthpiece/reed, they will be harder to reach, especially C and C#. At normal volume, they play well, but if you play pianissimo they will be unstable. Your embouchure position is important, you have to not put your upper teeth too close to mouthpiece tip. As I don’t take a lot of mouthpiece in the mouth, I have to move a little bit my low jaw forward and to widened my low lip for bell notes. Then low notes play well at normal volume. Another solution is to put a ball, like a golf ball in the bow. This allow for easy playing of C and C# even at pianissimo. But this alter resistance and tone on whole sax register a little bit. I use sometimes the ball for playing exercices. But for improvisation and recording I prefer playing without. Bell notes are colored and more muted than other notes, this is the nature of plastic enclosure mute. Altissimo play fine, a bit harsh but not that much. Growl is ok too like overtones. You can practice almost everything. I’m a kind of sax screamer sometimes, as a huge Pharoah Sanders fan. As playing that way is very loud and needs natural acoustic environment for low overtones acoustics reactions, it’s another limit. But I accept it, and will wait for the sun !!

About monitoring, the reason I’ve chosed IOS and Iphone is because of no latency capabilities. Android devices will have too much latency for proper monitoring. Those who don’t like this brand, can still buy a used Ipad or Iphone (5S minimum for proper performance) for 120/150 euros. Or you can go through little mixers solution, some are around 40/50 euros, or even laptops and audio devices. I use sometimes my laptop for Ableton Live, but I like the compacity and convenience of my holder/Iphone system, and even for music production it’s a powerful device.

The mute arrived in two weeks. It’s selled now 369 euros / 399 dollars with free worldwide shipping. You will add to this customs (I paid 50 euros in France), the speaker stand starts at 19 €, and add to this the whole monitoring system if you want/need it.

I also made an audio test of the Saxmute One efficiency. Living room TV is set at moderate volume, I play sax inside the mute at pianissimo to moderate volume in the kitchen which is just near the TV. The recording IPhone is on the living room table. I play at first with kitchen door closed sax is barely audible, you have to push volume or use headphones to hear the sax. At middle of recording I open the kitchen door and play again and it’s not even louder than TV. Sax distance to Iphone mic is 3 meter, TV is 2 meter. You can listen to it on Allihoopa.

I’m in contact with the Saxmute One conceptor/seller, he’s a very kind guy. He always works on some improvements which is very nice. You can also find some YouTube tests like this one from Sax.xo.uk:

This mute changes my sax practice life, nothing less.

Feel free to ask me any questions on my specific setup.

I’ve also posted the initial review on Cafesaxophone and Saxontheweb.